Impact of music on “quaran-teens” 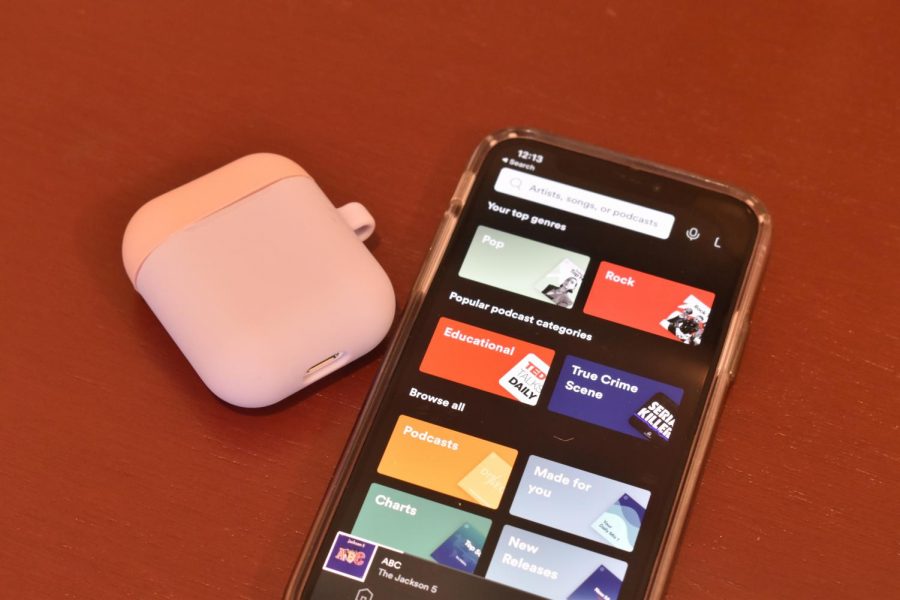 Music has become a place of escape and comfort for "quaran-teens."

“Well we’re all in the mood for a melody / And you’ve got us feelin’ alright.” Joel’s lyrics sum up the universal consensus among teens. Throughout the last year, particularly due to the pandemic and stay-at-home orders, music has played a significant role in helping teens feel “alright.”

Studies have consistently shown that music is beneficial for mental health. According to the BBC, a study at McGill University in Montreal conducted experiments testing the impact of music on dopamine—the chemical responsible for happiness and pleasure. Researchers at the university remarked that “levels of dopamine were found to be up to 9% higher when volunteers were listening to music they enjoyed.”

With the difficulties posed by the pandemic, teenagers across the globe have turned to music as a coping mechanism and as a new outlet for stress release and pleasure intake. Five students from the Castilleja community, ranging from grades eight to twelve, were interviewed on their perspective on music during COVID-19. Enjoy the perspectives of our very own: Flo Correa Agazzi (‘25), Jesse Gross (‘23), Alister Sharp (‘22), Diana Viveros (‘21), and Elle Giannandrea (‘21).

In addition to the interviews, each student created a playlist of their top songs of the moment, which can be found at the end of the article.

On average, how much music do you consume?
Alister Sharp (‘22): I listen to music constantly. My “Spotify wrapped” came out to about 30,000 minutes played last year and I’m sure it will end up being, even more, this year.

Jesse Gross (‘23): I mean, not to flex, but last year I had 217,754 minutes on Spotify (although that’s just because I leave it playing all night when I sleep). But yes, I usually listen to music for most of the day. Perks of online school, I guess.

What musical genres do you listen to?
Flo Correa Agazzi (‘25): I listen to rock, Indie Rock, Kpop, some pop—there are so many.

What role does music play in your life?
Flo Correa Agazzi (‘25): I use it as a form of entertainment and sometimes as background music for other things like drawing and school.

Diana Viveros (‘21): I enjoy listening to music from drive to school to in between classes. My friends and I make “collaborative playlists” where we can all add our own songs. I’ve also made playlists where I add a song every day for a couple of weeks. It’s a way to both relax and have fun.

Alister Sharp (‘22): I started getting more into music right as COVID hit. I make “currently” playlists, which I add my new and current music to. It’s an efficient way to collect the music that I am listening to at that moment. I’ve been using the same one throughout quarantine and it’s great to look back on what I’ve added.

In your perspective, what makes music good?
Jesse Gross (‘23): I think that my favorite part about music is how as individuals, we take the lyrics and create our own meanings associated with them. There’s never a “wrong” interpretation, a notion that we don’t experience too often. So I guess in the end, my favorite music comes from lyrics and meanings that I can dissect.

Elle Giannandrea (‘21): I like music that is energetic and upbeat—really good music has a strong rhythm.

Who do you listen to or share music with?
Alister Sharp (‘22): My friends and I “screen-share” music on zoom. We often work and listen together. My dad and I also like to listen to music together. We listen to Billy Joel and Jamaican music, in particular.

Jesse Gross (‘23): Sharing music with others is such a uniquely brilliant love language. Hearing someone gush over a new artist or song that they enjoy is an intimate experience that, especially during Covid, is something I think we all need. I love sharing music with people who love it as much as I do, like my friends.

Diana Viveros (‘21): I procrastinate my schoolwork a lot by listening to music. I have also been learning how to play the guitar as well.

Alister Sharp (‘22): Music is a “background track” to my life. I listen to music while I work, drive, sit in class, and zoom with friends.

How has your music developed over the last year?
Jesse Gross (‘23): I’ve gone through many musical phases over this year, some more embarrassing than others (my questionable One Direction moment), but each one has brought me loads of joy so I can’t regret them. My own personal music consumption method is creating 30 song playlists and listening to nothing but that playlist until I get sick of all the songs, then promptly creating a new list. My music has changed a ton over quarantine, and I love looking back and making fun of what I listened to just months ago.

Elle Giannandrea (‘21): A while back, I went through a phase of just hating all my music. Recently, I’ve started to listen to new music more often. I actually started a playlist over the summer full of music that I am interested in, but that I can come back to later. It takes the stress off of sorting and filing it into playlists.

What does music mean to you, especially at this time?
Flo Correa Agazzi (‘25): It’s a kind of escape—when I listen to music I am not alone.

Diana Viveros (‘21): During this time, music helps me connect and share with friends. I am able to check in on friends and recommend new music to them. I also make playlists for my friends as a way to make sure they are doing okay.

Alister Sharp (‘22): Music is a way to connect with myself and others. I am able to take time and think while also being able to share songs with friends and play music together. It’s a good way to stay in contact with my friends during COVID. It’s a source of joy during this time.

Jesse Gross (‘23): Music is an escape; it’s comforting. Making random playlists on Spotify can sometimes describe feelings better than words ever could, which proves especially helpful during a pandemic where words seem to be more limited than ever. I also heavily associate specific songs or artists with time periods in my life, so for me, music somehow represents growth and change. I think that’s why I really enjoy making playlists—to capture my thoughts and look back at them later.

Music to my ears

Personally, I have found immense value in the community that exists and has strengthened during COVID around music and music culture. Music brings people together, even in the most difficult circumstances. In this time of isolation, music has been an outlet for distraction and happiness. One particularly relevant example of how music has helped Castilleja students cope with COVID is an activity Jesse and I spend hours engaged in: we like to call this activity “Spotify-stalking.” As our (not-so-creative) name suggests, Jesse and I go through hundreds of accounts finding new music to experience together. We explore the wide variety of music selections of our friends and the broader Castilleja community. We even came across Ms. Hansen’s Spotify account and were delighted to find a playlist entitled “Jenny and Laura’s Breakup Playlist.”

Stalking aside, music truly brings people together and cultivates relationships. No matter how far how apart we are, pandemic or otherwise, music remains a constant connector and reminder of community.